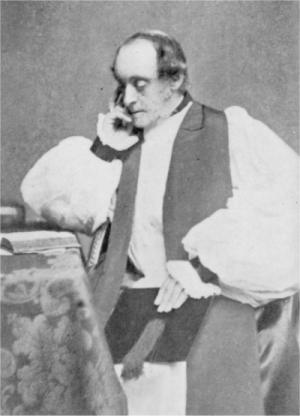 THE subject of this sketch deserves a place among the Welsh leaders of the Victorian era. He was for a time pupil at the Shrewsbury School under Dr. Benjamin Kennedy, one of the leading Greek scholars of his day. From Shrewsbury he went to Trinity College, Oxford, where he distinguished himself as a scholar. He was there an active member of the Architectural. Society. This society had had rather a languid existence, but was greatly stimulated and strengthened by the archaeological zeal of the " Oxford Movement." His share in the work of the society was mainly artistic and historical. His knowledge of architecture, and his devotion to the art while an undergraduate stood him in good stead in after years, for, as Bishop, he had to pass judgment upon various plans for the restoration of old churches, and the erection of new.

Although ordained deacon in 1848, Basil Jones decided to wait five years before taking priest's order. He responded to the invitation of the Archbishop of York (Thomson) to become his examining chaplain. He did excellent work not only as chaplain, but also as Vicar of Bishopsthorpe and Archdeacon of the West Riding. In 1874, he was called to succeed Bishop Connop Thirlwall, his " great predecessor," as he always styled him. While fully realising the great responsibility of his position as Bishop, he welcomed the opportunity, for he was born and bred in Cardigan, and he loved not only his Church, but the people of Wales irrespective of creed or class.

It soon became evident that the appointment was a wise one, for he proved himself to be a man of deep and wide culture, a prudent administrator, kind and accessible to his clergy, and friendly in his attitude towards those who differed from him.

When a great scholar undertakes the office of a Bishop this means almost always of necessity a farewell to literary work. As it was with Stubbs, Creighton, Gore, so it was with Basil Jones. He threw himself unreservedly into his new duties devoting himself to them conscientiously, with ardour quickened in his case by the patriotic instincts of a Welshman. " St. David's," he used to say, is about the largest and poorest of all the dioceses in this realm." It called for all his energy of self-devotion.