Lewis Thomas was born circa 1855, the second son of William Thomas of Frongoch (1810-94) and his wife Elizabeth. He apparently learned carpentry and joinery and moved away from the parish as a young man. He was in Birmingham in the early 1880s and from there emigrated to Sydney, Australia. 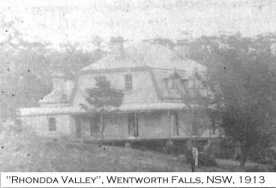 There he became a successful builder, with premises in City Road, Sydney, just outside the centre of the city and next to the University of Sydney. In 1896 he married Annie Waddell, daughter of a family from the town of Singleton in the Hunter Valley, north of Sydney. They had four children, Florence Beryl (b. 1897), Jessie Treddol (b. 1898), Hazel Sylvia (b. 1902) Gordon Lewis (d.o.b. unknown). He built a substantial dwelling just outside Wentworth Falls, in the Blue Mountains, west of Sydney, an area that was becoming fashionable at the beginning of the twentieth century, especially for the middle class of Sydney to escape the summer heat. The house, known as 'Rhondda Valley', still stands. He is believed to have died in 1933. He has numerous descendants around New South Wales today.

MR. LEWIS THOMAS
Mr. Lewis Thomas, of Cremorne-road and Wentworth Falls died on February 7. The remains were cremated privately on Wednesday after a service by the Rev. H. N. Baker, of St. Thomas' North Sydney. Mr Thomas was a Welshman. He came to Sydney over 50 years ago and engaged in the building trade. Among the buildings which he erected were Messrs. Pitt, Son & Badgery's store at Ultimo, the Lyceum Theatre, Messrs, A. and A. Horderns' in George-street, Haymarket, Eastway's and the Australian Provincial Assurance Association's, in King-street. Mr, Thomas was a large property owner in the city, North Sydney, Cremorne and Glebe. He was also financially interested in the Sydney Steel Co., Woolworth's, the New South Wales Brick and Tile Company, and other industrial concerns. He leaves a widow, three daughters, and a son.'
Obituary, Sydney Morning Herald, Saturday, 11 February 1933, p. 17

[For info: George Street is the main street in Sydney, NSW. Most of the above names would be familiar to Sydneysiders today, even if the buildings no longer exist. Woolworth's is a substantial Australian concern but not connected with F W Woolworth.]

Thomas Jones was born about 1827 Llanfihangel Geneu'rglyn, Cardiganshire, Wales and first appeared in records at Gwarcwmbach farm in the parish Llancynfelin by 1861, perhaps even earlier. Thomas was married twice his first wife was called Sarah. Thomas and Sarah Jones were the parents of six children: Mary born about 1854-1855, Sarah Ann about 1856, Margaret 1861, John Thomas about 1862, Griffith about 1864 and Elizabeth about 1868. Most if not all their children were born at Gwarcwmbach. It appears that Sarah died shortly after their youngest daughter Elizabeth was born for Thomas is a widower living alone with their children at Gwarcwmbach in 1871.

Thomas and Jane Jones became the parents of six children, who were all born and raised at Gwarcwmbach. David Jones, the oldest, was born in 1874 and married in 1898 to Jane Jones of Ynyshir Farm, Eglwysfach, Cards., Wales the daughter of William and Catherine Jones of Vanner Llanelltyd/Brithdir, Meirionethshire, Wales. David and Jane Jones had 5 sons and 3 daughters with the eldest son, Thomas Goronwy Jones, being born at Gwarcwmbach in 1898 and the second son, William Idris Jones, being born at Moelcerni, Cyfoethybrenin, Llanfihangel Geneu'rglyn in 1903. David, leaving his family behind, immigrated to Harney County, Oregon U.S.A. in 1912 where at first he herded sheep for a family who had emigrated earlier from the Elerch/Talybont area. By 1915 David started acquiring homestead land and in 1920 was joined by his sons, Goronwy and Idris Jones, who made Harney County their permanent home. David returned to Wales in the mid 1920's and died at Gartheli in 1940. It is believed that David moved his family to Tyncwm Glandyfe, Wales just shortly before he had left for the United States.

The second child of Thomas and Jane Jones was Catherine born about 1875. Richard Jones, the third child, was born about 1877 and immigrated to Harney Co., Oregon. Richard first acquired property there about 1914 and in 1918 married Violet Josephine (Davies) Pellar the daughter of Henry Seymour Davies and Mary Ann Morris of Glanyrafon, (Talybont), Ceualan Maesmawr, of Llanfihangel Geneu'rglyn. Richard and Violet Jones moved shortly there after to Canada where all their children were born. While in Oregon, Richard Jones was said to have raised mules and horses for the U.S. Army.

Thomas and Jane Jones both died at Gwarcwmbach, Thomas in 1899 and Jane in 1906, and were buried at the Nantllain Cemetery.

or The Long and Winding Trail to Llangynfelyn

When I first started to trace my fathers side of the family, I started in Montgomeryshire, as I knew that that was where his forebears had lived. I managed to get as far back as my great grandfather Richard Lewis, a joiner by trade, who married Martha Evans in 1851 at Llandysilio Montgomeryshire. On their marriage certificate, Richards father was given as David Lewis, occupation  builder. Further research revealed that Richard died of TB in 1857 at the age of only 39, leaving his young wife with 3 children. The family were living at Bridgnorth in Shropshire when this happened, and on looking through the Bridgnorth trade directories, I saw that Richard Lewis had been in business with his father David in the town as joiners and builders. However, I did not know where they had originated from.

I looked up Llangynfelyn and Llanbardarn on my road atlas, and was amazed to see that we had passed through Llangynfelyn many times, whilst my husband and I had been on our way to the National Library of Wales in Aberystwyth from our home in North Wales. Llanbadarnfawr is, of course, situated right next to Aberystwyth, where our research into our other Welsh ancestry had taken us on numerous occasions, and all that time I had no idea that I had family connections so near!

On our next visit to Aberystwyth, we stopped and visited Llangynfelyn church, and walked around the graveyard. Almost immediately we entered the churchyard, we spotted a large gravestone. It is on the left-hand side of the path just as you enter through the gate, and consists of two upright stones joined together, and two flat stones also adjoining, the whole surrounded by a low, cast iron, decorative fence. The inscription on these stones gives a great deal of information, including the following: - "This stone was erected to perpetuate the memory of David Lewis of Trerddol, Carpenter, died 1833 age 86,his wife Mary, died 1822 age 71.Mary, wife of David Lewis jnr., died 1826 age 46 years,and finally, the last named David Lewis died 1857 aged 79." This information enabled me to go back a further generation  to David Lewis senior, (1747  1833).

David Lewis and his son Richard, both carpenters, had obviously left their home village of Llangynfelyn together, in order to find work in England. David must have returned home sometime after 1851, as he died at Tretaliesin on 14th. November 1857, just 12 days before his son Richard died at Bridgnorth.

Further research, via the Llangynfelyn web site, has enabled me to find Richard Lewis and his sisters Mary Lloyd, Ann and Margarets baptisms at Llangynfelyn Church, also another sister Jane who died at the age of ten. Mary Lloyd Lewis married Richard Felix, who belonged to a well known family from Llangynfelyn, and they stayed in the village for the rest of their lives, having eight children. I have not been able to find out if Ann ever married, or what became of her after her appearance in Birmingham in 1851. Margaret and her husband Richard Owens, a saddler, seem to have stayed on in Birmingham. Martha the widow of Richard Lewis went on to marry twice more. She stayed in her home village of Llandysilio Monts. for the rest of her life.

I have so far not been able to trace David Lewis senior, (1747  1833), and his family any further back. I have another un-solved mystery too. After Mary Lloyd Lewis, in the following generations there are four more girls with Mary Lloyd as their Christian names, also several other people were given Lloyd as their second name. I feel that the Lloyd connection must come from either Mary (?), the wife of David Lewis senior, or Mary (?), the wife of David Lewis junior, but I cannot make any headway with this. Can anyone help?